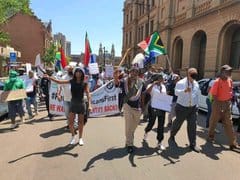 The protest against immigrants code named NoToZimWorkPermits has been a monumental flop in South Africa, notes renowned investigative journalist.

Information filtering through is that a small bunch of PutSouthAfricaFirst activists turned up in Pretoria.

Hopewell Chin’ono monitoring the situation says some South Africans opposed to the protest.

They reportedly joked that there were more pigeons than protesters at the march.

Meanwhile, politicians like Julius Malema is on record against the protests.