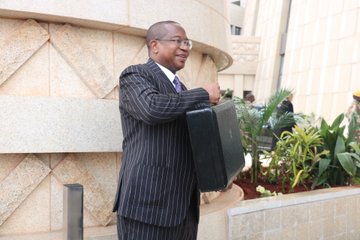 Former Minister of Finance and Economic Development, Tendai Biti has trashed the 2023 National Budget presented yesterday saying it is cruel and anti-people.

Biti says the projected growth rate of 3.8% in 2023 is ambitious & based on unsound assumptions, as it ignores the shrinkage of the global economy, the effects of the Russia Ukraine war & more importantly the natural freeze of an election year.

The underfunding of health budget (11%) & public education is an indictment. However the pumping of huge resources into command agriculture betrays that this an election year & that the 2023 Budget is a power retention agenda. Truth is Mthuli and ZANU PF have failed,” he says.

“Zimbabwe is in the middle of a structural economic crises characterized by poverty, disequilibrium, high inflation, an exchange rate crises& total collapse of public services. For the third time in 20 years Zim is in the middle of yet another self-induced recession created by high borrowing costs, relentless inflation & a squeeze on government payments to contractors.

“As we have argued before, the exchange control mess, right at the center of Zim macroeconomic instability must be resolved by dollarization, floating of the Zim$, scrapping the FX auction & the gold coin. Sadly this did not happen. The mess of multiple exchange rates will.

“Therefore continue with consequent pricing distortions. The raising of VAT to 15% is an attack on working people & reflects the ideological vacuousness of regime it is elementary economics that in a recession taxes must be lowered to stimulate aggregate demand.

“The restoration of duties on basic commodities particularly in a festive season is equally sadistic & bankrupt. The imposition of mining royalties to be paid partly in actual minerals is equally zany. Apart from gold how does one pay chrome ,coal or a PMG as a tax?,” says Biti.