Mmusi Maimane launches party, says is ready to be SA’s next president 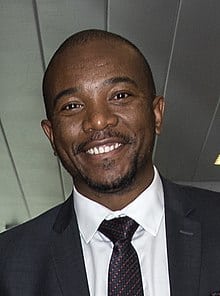 Former Democratic Alliance leader Mmusi Maimane has partnered with struggle veteran and current deputy mayor of Nelson Mandela Bay metro, Mkhuseli Jack, to form a new political platform, Build One SA, which is expected to contest the 2024 elections.
The party was launched on Saturday in Soweto, with Maimane setting ambitious targets to launch Build One SA in every province by year end.
He extended an invitation to independent politicians and community leaders to join him in what he said was a party that would usher in a new era in the country’s politics.
Build One SA is aiming to become a platform for all independent politicians.
Jack, who founded the Abantu Integrity Movement (AIM), said that he would continue his obligations in his Gqebera-based party.
Jack was recently elected deputy mayor after he and other smaller parties walked away from the ANC-led coalition to join with the DA in ousting mayor Eugene Johnson.
Build One SA is also expected to put pressure on parliament for electoral reform, which will ensure independent politicians run for provincial and national elections.
Parliament has been accused of dragging its feet in implementing a June 2020 order by the constitutional court to amend the Electoral Act.
The apex court found the act unconstitutional in a landmark judgment that paved the way for the One South Africa Movement – founded by Maimane – to work with some independent candidates during the 2021 elections.
Maimane made bold promises during his inaugural speech on Saturday, committing to cleaning up shop should he be elected president.
Taking potshots at the ANC-led government, Maimane equated its leaders to a father who eats KFC while his children starve to death. He said the country’s current political leadership had lost any sense of ubuntu.
“It is here where state capture matters, we have men and women who choose to feast, while allowing suffering people to die in hospitals without generators, to learn in schools without books, boards, and latrines, they even arrive at funerals of babies who died in … sewage in their fancy SUVs. This demonstrates a forgetfulness of being with fellow South Africans.”
“We have lost our global respect not only in how we treat the immigrants, but our foreign policy shows a country still stuck in the Soviet Union era,” he said.
The former opposition party leader called for a new democratic progression and post-liberation politics.
He said the government needed to move towards digitisation and use big data to communicate with and improve the quality of life of citizens.
“No more days where our grandmothers can come to a clinic only to be told their files are missing, or those on the housing list not knowing when they will ever have the dignity of a home.”
He promised a reform of South Africa’s ailing economy, jobs in every home and increased infrastructure to ensure consistent supply of water and electricity.
“We will in due course introduce a National Venture Capital fund that will invest in micro-enterprise and in brilliant ideas coming out of our universities. We will do this by ensuring that we localise our economy.
“We do this by ensuring that our Kasi (township) economy is well managed and that the electricians, plumbers, caterers, and tent makers have the support they need to win in business, to feed their families, and hire the youth in their communities.
“We [will] make sure that our formal economy is freed, that those who farm can employ more people, that factories are working 24/7 and that we limit easily imported goods that destroy and at times get an unfair advantage on local goods.
“We must educate our young people. We have to start with children in early childhood development centres. I know their power because I went to one at Dobsonville not far from here and it made all the difference.
“It meant my mother could carry on her job as a cashier and my father as a factory worker. It meant that in the [formative years] my brain could be developed, taught, and educated,” he said.
Maimane promised to eradicate pit latrines, and work towards ensuring that free tertiary education was realised.
“The solution to unemployment is relevant skilled education, it is not a coincidence that unemployment is lowest among graduates. More can be done to ensure education and employment for our young people. I guarantee that more can be done.”
Maimane rose to prominence when he was handpicked by DA federal council leader Helen Zille to be the party candidate for Gauteng premier.
He became party leader in 2015 with an endorsement from the party matriarch. Their relationship soured when Maimane was forced to act following Zille’s controversial opinions on apartheid.
Following the poor results of the DA in the 2019 elections, Maimane appointed a review panel consisting of former DA leader Tony Leon, former chief strategist Ryan Coetzee, and Capitec co-founder Michiel le Roux – a director of Fynbos Ekwiteit, one of the DA’s biggest funders – to dissect the party’s performance.
The panel found that the DA was beset by indecisive leadership and policy uncertainty, among others. It recommended that Maimane, former chairman James Self and CEO Paul Boughey step down.
Maimane resigned in October 2019 and in 2020 formed the One South Africa movement.
Mail & Guardian