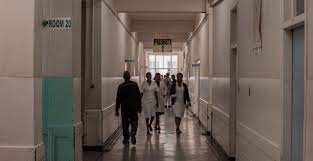 Reports reaching this publication are that Harare Hospital has gone for four days without sugar, meaning patients are not having tea and porridge.

One patient admitted at the hospital confirmed the development, that they have not been having tea for the past four days.

“Yes we have not been getting tea or porridge for the past four days. We are not sure as to why, but rumours are that the hospital has no sugar,” said the patient who declined to be named.

Meanwhile, prominent investigative journalist Hopewell Chin’ono says he got information from a senior medical officer at the institution, confirming the reports that the hospital has no sugar.

“A senior medical doctor at Harare Hospital has just informed me that the hospital has no sugar for breakfast-tea for patients,” he says.

Apparently, the state of affairs in Zimbabwe’s health sector is not that good. There are reports that there is shortages of medication, amid poor working conditions for health workers.

Civil servants particularly health workers have been up in arms with government demanding better pay and working conditions.

Be that as it may, the government is currently locked in a crunch meeting with representatives of civil servants over bonuses.

The government blames the problems on sanctions, however critics say it is because of corruption.