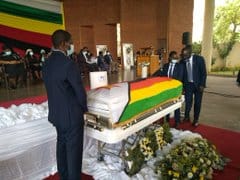 The body of National Hero Cde Simon Khaya Moyo has arrived at Bulawayo’s Amphitheater from where his memorial service will be held.

Minister of State and Party stalwarts like Colonel Tshinga Dube and Abigail Damasane as well as Paul Damasane from the Office of President and Cabinet are also in attendance.

Meanwhile, people from Bulawayo have thronged Bulawayo Amphitheater for a funeral service in honour of the late gallant son of the soil and National Hero. 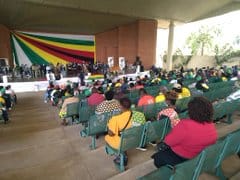 Apparently, SK Moyo has been described as a true cadre whose heroes status cannot be questioned.

He will be buried at the National Heroes Acre on Monday.

President Emmerson Mnangagwa will preside over the burial.

When Moyo joined the liberation struggle, because of his character, he was chosen to be a special assistant to late vice president Joshua Nkomo.