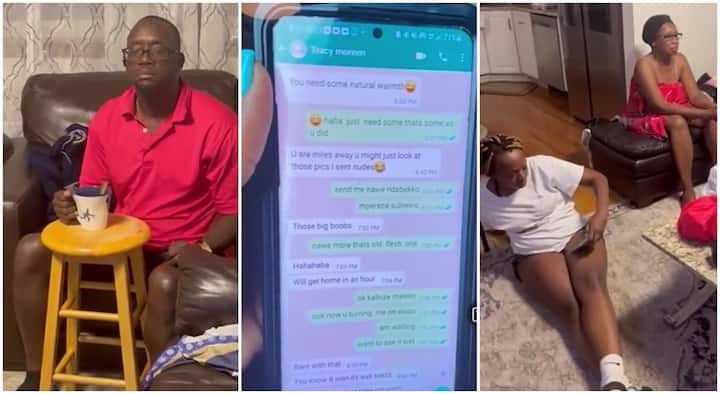 A Ugandan man based in USA has gone viral after his daughters shared a video of his secret chats with their mother in front of him. In the video that has gone viral, which was shared by @FahadAmirN. the father of the kids is seen seated on a black leather couch, holding a cup as he sips on tea, listening keenly as one of his three daughters read messages he exchanged with his girlfriend.

The three teenage daughters went through their father’s phone in his absence and took screenshots of his explicit messages with a mistress.

They later broadcasted the messages on their family television in the living room with both their parents present.

In the video, the three daughters can be seen confronting their father over the cheating messages they shared on the family TV.

The one recording the video showed the texts between their father and a lady identified as Tracy. She perused her dad’s phone and questioned him why he decided to cheat on their mum and insulted him.

The man was sitting in on a chair during what looked like a family meeting with his children and wife in the living room. In the presence of his wife, his children displayed the entire text of his alleged conversation with the side chick. Nothing was left out by the children who were disappointed in their father. He attempted to defend himself but all what he wanted to say was shut down by his kids who were livid with

These kids checked their Dad's Phone, found messages between him & another woman cheating on their mom, confronted him as they displayed the messages for everyone to read in the living room.

This is a Ugandan Family in USA. pic.twitter.com/QtoEIGLsNx 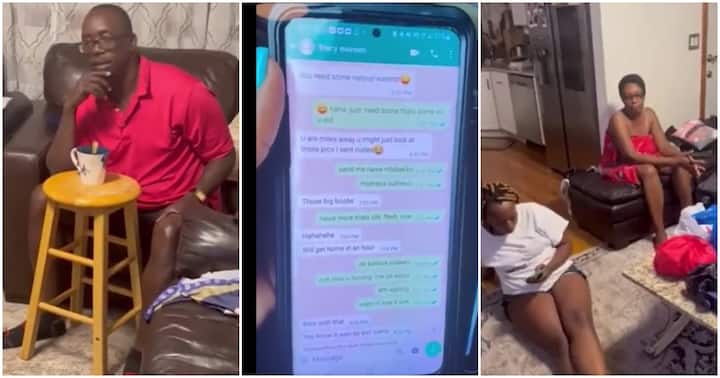 The man’s wife sat in total shock and listened to her children. She went on to lament how badly her husband has behaved in the past.

100% there’s clearly another issue in this family dynamic. No respect or regard for each other.

: “This is hella disrespectful at all levels. These kids meddling in their father’s life.”

“Not supporting his act, but this is really disrespectful. Call him out in private and treat it not post it online.”