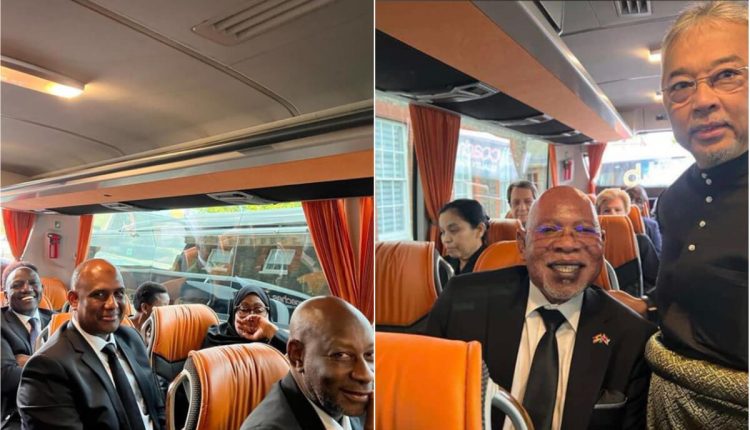 African Presidents and Prime Ministers have been humbled in The United Kingdom during Queen Elizabeth II’s funeral.
Following the death of British longest monarch Queen Elizabeth II, a number of foreign dignitaries including African leaders made their way to UK to pay their last respects at this global event.
Meanwhile, global leaders were ordered to give up their diplomatic cars and, instead, share transport with their fellow Presidents and Prime Ministers as part of plans organised by the Foreign, Commonwealth and Development Office (FCDO) to enable safe travel to the Queen’s funeral.
They were made to board buses to attend the Queen’s funeral.
However, an exception on security grounds was made for US President Joe Biden.
Biden and his wife were allowed to travel in the armour-plated Cadillac known as the “Beast” to Westminster Abbey.
Queen Elizabeth funeral African Presidents:
Kenya’s President William Ruto, Tanzania’s President Samia Suluhu and other African leaders rode in a bus to attend Queen Elizabeth II’s state reception in the UK. Image Credit: Twitter via @AfricaFactsZone)
Apparently, pictures of African Presidents inside a bus have since flooded the internet.
The pictures have since caused a stir on Twitter.
Tweeps cannot believe that African presidents were made to board buses just to attend Queen Elizabeth’s funeral while US President was allowed to ride his own entourage.
This spurred up racist sentiments as netizens echoed that their African leaders were being humiliated.
Former Kenyan Governor, Mike Sonko commented on the pictures saying:
“These foreigners lack manners. How can they keep African Presidents in one bus in London? God forbid something bad happens on that bus. What will happen?”
Check out some of the reactions from Twitter;
@Thandzlk
Look at them even smiling in a bus, mind you in their own countries they won’t be caught dead in one, but to bury ‘Her Majesty’ they’ll do anything.
What an embarrassing lot. @MahachiJosey
The British will humble you. Spot the difference!!!
Leader and Lesser Leaders
Our leaders are being treated the way they treat us @motsi_wadzanai
The first problem is going to the funeral of someone who played a role in making your ancestors suffer.
Then being treated like crap when you go there… literally there is no bottom for these useless leaders. Self-hate. But on a side note there’s nothing wrong with a bus.
Newsreport