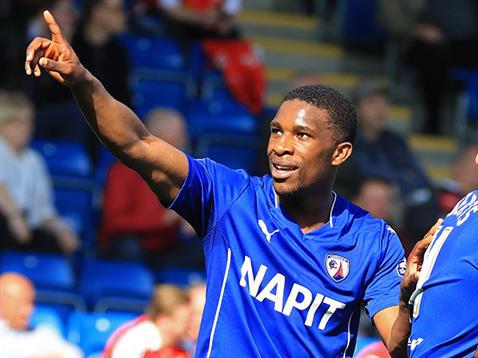 Defender Tendayi Darikwa is proving to be a good leader at Wigan Athletic, who are looking to work their way back to the top tier of English football.

Jordan Zemura’s AFC Bournemouth also climbed to the top of the Championship after a victory at the weekend.

The Latics have been doing well under the captaincy of Darikwa, who was given the armband, at the beginning of the season.

Darikwa joined the club in January, when they were fighting to survive relegation, under the weight of off-field challenges, including insolvency.

The victory over Cheltenham marked only the first time, since 2017, they have won five consecutive league games.

Darikwa’s influence, on and off the pitch, has rewarded the faith of Wigan manager, Leam Richardson.

“There are two characters to a footballer — one on the pitch and one in the changing rooms — and in my opinion, Tendayi is excellent in both.

“He sets standards in training for himself and others, and then on the pitch, the quality speaks for itself,” said Richardson.

Zemura continues to enjoy his breakthrough season in the Championship.

Bournemouth’s quest, to return to the English Premiership, received a big boost when they returned to the top of the Sky Bet Championship, with a deserved victory.

Zemura, who was promoted from the Cherries academy this season, has performed beyond expectations, and it has become difficult for manager Scott Parker, to drop him from his squad.

Bournemouth, who have now won four games on the trot, had dropped to second place on Friday, following West Bromwich’s dramatic victory over Queens Park Ranger, on Friday night.

They have maintained an unbeaten start this season with six wins and three draws.

The Cherries are now two points clear at the top with 21 points in the bag, although Parker says he knows there is more to come from his team, as the season progresses.

“Being undefeated is no mean feat in this division,” he told the club’s website.

“That’s very tough to do and at the moment we are winning games and that is a good sign.

“That is what pleases me, because there is loads and loads to improve.

“This is a young team in development, I am someone that really believes in processes, we have processes in place, and this is exactly what this is about.”

Zimbabwean striker Admiral Muskwe did not play due to a leg injury sustained in the previous league round.

Another Warriors striker, Tino Kadewere, also missed the action in Lyon’s 1-1 draw with Lorient, in the French Ligue 1, because of the knock he picked when the Warriors hosted Bafana Bafana, in the opening match of the 2022 World Cup qualifiers.

Marvelous Nakamba was an unused substitute in the 1-0 victory at Manchester United in the English Premier League.

Warriors’ prospect, Brendan Galloway, featured as one of the three centre-backs, in Plymouth Argyle’s 2-1 victory over Doncaster, in League One.

The former England Under-21 player is enjoying his revival at the Pilgrims, who have now risen to fourth place in the English third tier.

The 25-year-old has featured in seven of the nine games for the club and was on the field for 74 minutes on Saturday.

Plymouth Argyle manager Ryan Lowe expects both Galloway and Guinea Bissau teammate Panutche Camara to get another opportunity to make their international debuts.

“With Brendan and Panutche, it was out of our hands. I think they understood. They were fine,” he told The Plymouth Herald.

“I know there have been a few shambolic situations with the Argentina vs Brazil game getting called off and stuff like that.

“Panutche was actually fine to go but they didn’t want him for just one game because there were two games. Look, I’m sure they will get called up again if they continue with their performances.”

Galloway is set to get another call from new Warriors interim coach, Norman Mapeza, for the upcoming back-to-back matches against Ghana.

Bonne captained Ipswich Town, for the first time, in the 1-1 draw against Sheffield Wednesday, on Saturday.

The Zimbabwean striker wore the armband in the absence of Lee Evans, who picked up an injury on the eve of the game.

Bonne, who has scored five goals in seven appearances for his team, created a couple of chances but could not get the goal at the weekend.

US-based defender Teenage Hadebe’s Houston Dynamo’s three-match unbeaten streak came to an end when they lost 0-2 to Minnesota on Saturday.

Nyasha Mushekwi continued with his goal-scoring form in China where he bagged his 18th goal, in 22 appearances, for second tier side Zhejiang Greentown