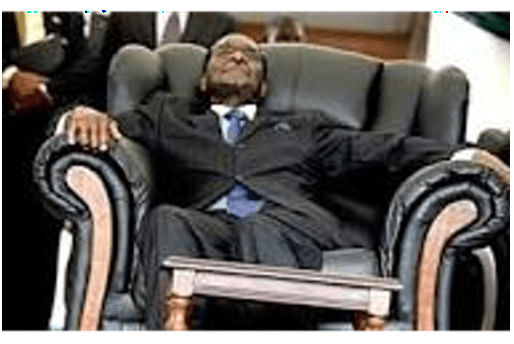 A team of medical doctors from Singapore worked around the clock last week in a bid to  “medically prop up” President Robert Mugabe who is now only able to work 30 minutes per day due to old age, according to a Zanu PF insider,  Ken Yamamoto.

Faced with a challenging week of Heroes Day celebrations and Zimbabwe Defence Forces commemorations, Mugabe was left with no option than to call Asian doctors to help him overcome the rigors of Zimbabwe’s long weekend.

While highlighting Mugabe’s bedroom woes as he ‘no longer sleep in the same bed or bedroom with his wife Grace’, the most striking element in the Yamamoto report is the fact  that Zimbabwe’s president  has drastically reduced his daily working routine to half an hour afternoon sessions.

“Mugabe now works 30 minutes a day, often coming to his office around 3pm and leaving half an hour or so afterwards to go home and sleep,” says Yamamoto.

The claims could not, however, be independently confirmed.

Zimbabwe’s liberation war veterans recently broke ties with Mugabe and asked him to retire as he is too old to run Zimbabwe.

They went on to produce a no nonsense document ‘Mugabe Must Go Communiqué’ that hit the president’s face like a Tsunami.

According to Yamamoto, Mugabe’s days are numbered;

“He is finished. He will not be President of Zimbabwe by the end of 2017 at the very least. In fact, he will be lucky to remain President beyond December 2016,” wrote Yamamoto.