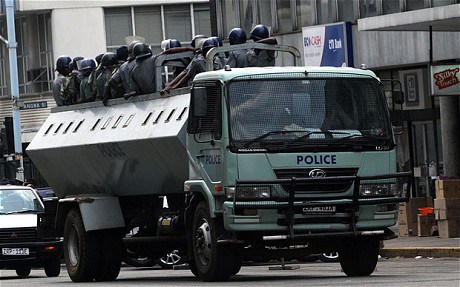 The Zimbabwe Transformative Party (ZTP) has reported that 35 of its members, including its leader Parere Kunyenzura were arrested while at a church service in Harare central business district last Saturday.

According to the ZTP, the 35 were arrested while engaging on a prayer walk in central Harare, Saturday afternoon.

The newly formed party Zimbabwe Transformative Party praesidium has been arrested today in Harare.
Parere Kunyenzura, Simon Goshomi, Prince Mukozho and some other party members are being held at Harare Central Police station. They’re expected to appear in court on Monday.

The ZTP members were singing and conducting prayers in full church regalia in the CBD when they were arrested.
They had planned to conduct prayers at Copa Cabana bus terminus, Fourth Street bus terminus, Market Square and at the Department of Immigration.

They were charged with criminal nuisance and taken to Harare Central Police Station. They all deny the charges.
Kunyenzura, a self-styled prophet, claimed God ordained him as the next President of Zimbabwe when he launched the party in May this year.

He said neither President Emmerson Mnangagwa nor his biggest challenger, Nelson Chamisa, the leader of the opposition CCC, will win the 2023 presidential election.

Kunyezura, who is the leader of an apostolic sect, warned state security agencies not to try to thwart what “God” has ordained.