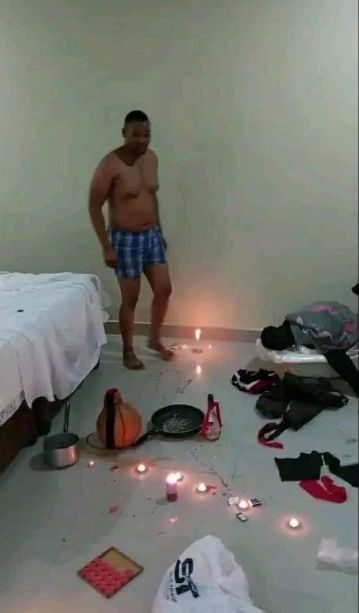 A pregnant married women on the Copperbelt, Zambia is trending after she was recently caught red-handed by her husband in their matrimonial bed with another man believed to be a pastor.

Apparently, the aggrieved husband recorded a video of his wife in an uncompromising act with the pastor which has since gone viral like a veldfire.

According to sources, the woman only identified as Martha had told the husband that she was visiting her family in another town, Kitwe.

It is reported Martha use the pretence to sneak in her side boyfriend, however, she ran out of luck as her husband came home an unnoticed only to find the two enjoying the fruit of their love in his matrimonial bed.

Apparently, in an effort to please Martha, the said boyfriend (pastor) decorated his rival’s bedroom with candles, flowers, etc.

Meanwhile, in the video, the husband is heard confronting her dishonest wife:

‘”Martha you told me that you were going to Kitwe… What’s this? Don’t come near me!..”