Man on the run after killing another over sadza 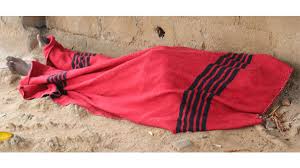 Zimbabwe Republic Police (ZRP) in Kadoma are investigating a case of murder which occurred on 23 November 2022 at Machokoto Compound, Hazel Mere Farm, Patchway.

The suspect, Farai Hlongwani Mlilo (27) hit the victim, Milton Gido Siziba (38) with a firewood twice on the head after an argument over sadza.

The victim died on admission at a local hospital.

ZRP say the suspect is on the run and is calling on anyone with information to contact any nearest police station.

In another matter, on 23 November 2022 police in Zvimba acted on a tip-off and arrested Criswell Maponga (42) in connection with two cases of stocktheft in which eight cattle were stolen at Farm 79 Zowa and eight cattle stolen at Mhungu Village.

The arrest led to the recovery of 15 stolen cattle.