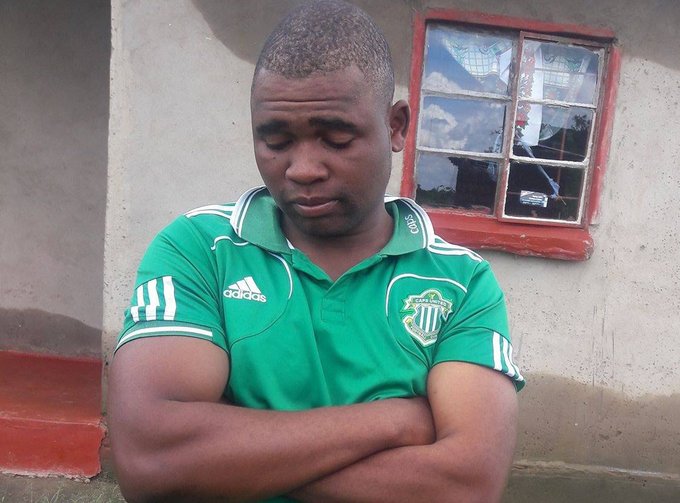 Image: One of the suspects a police officer

Seven men accused of the September 23 robbery and murder of Marondera businessman Paul Chimoka, 62, have arrived at the Harare Magistrates Court in leg irons.

Among the suspects is a police officer (pictured).

Police now linking gang to 6 other armed robberies, as indicated in a statement by Zimbabwe Republic Police spokesperson:

The Zimbabwe Republic Police confirms the arrest of Josephat Muchenje (58), Bright Magodhi (22), Crispen Kado (26), Felix Dapi (50) and Tatenda Mudzangairi (27) in connection with the callous murder and armed robbery cases where Paul Chimoka (62) died in Marondera on 23’d September 2022 at 0200 hours.

On 26th September 2022 detectives reacted to a tip-off and arrested Josephat Muchenje (58) at his place of residence in Marlborough, Harare.

A white Nissan AD vehicle registration number AFY 0342 used as a get-away car by the suspects and two cutting discs were recovered at the suspect’s residence.

Upon being interviewed by the Police, the suspect implicated his four accomplices, leading to their subsequent arrest in Harare at different intervals and the recovery of 4 x 9mm rounds of ammunition stashed in Crispen Kado’s wardrobe in New Tafara, Harare.

The Police has also established that the suspects were getting information from a bakery employee on their targets in Marondera.

The suspects are linked to six cases of armed robbery and a case of murder which include the robbery Rakodzi Secondary School on 15 September 2022 where they stole some laptops, foodstuffs, safe keys, US$120 and ZWL$ 2000.

On 18th September 2022 the suspects attacked the complainants in Mt Pleasant at 0300 hours and took US$55 000 cash, several cellphones, clothes and a South African registered Toyota Fortuner, registration number KH15HJGP.

The Toyota Fortuner was later found dumped at the intersection of Harare Drive and Mazowe Road. Investigations have also revealed that the suspects also attacked a family in Macheke on 10th June 2022 where they broke into a homestead and stole a Star Pistol, six live rounds, Mossberg Calibre 12 bore shotgun with nine rounds, electrical cables, two Sony plasma television sets, two DVD players and various groceries all valued at US$3 595.

Police investigations have also unearthed that one of the suspects, Felix Dapi has a warrant of arrest for absconding court after being arrested for unlawful possession of dangerous drugs and armed robbery cases in 2021. He is also under the microscope for a fraudulent bail application at the High Court through a public prosecutor who is also under investigations. The Police is also looking for an accomplice to the suspects who is currently on the run.

The suspects, all from Harare and Murewa were targeting local business people and miners in Filabusi, Matabeleland South and Inyathi

Matabeleland North. The suspects were getting information on their targets from Allan Hunduza who works for one of their targets as a driver. They have got pending robbery cases in Harare, Nyabira and Marondera.

Police recovered a pellet pistol with 38 rounds from the suspects and a Nissan Vanette, registration number AFZ 1624, used as a getaway car.

The Zimbabwe Republic Police applauds the public for supplying critical information on armed robbery cases in the country and will ensure that the law takes its course without fear or favour.