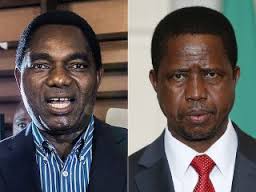 Just in..Zambia’s President Edgar Lungu has been re-elected, according to official results, which are being challenged by the main opposition party.

The electoral commission said Mr Lungu had secured 50.35% in Thursday’s vote, just over the 50% threshold needed to avoid a second round under a new electoral system.

Earlier, his UPND party withdrew from the ballot verification process.

2016 Zambia Presidential  Election Results Will Be Announced As They Come

There is talk of a runoff between the 2 candidates if none of them get 50% plus votes!

This will set stage for a mouth watering election rerun between the top two winners in few weeks time.

Zambia Presidential Election 2016, Final Results..132 constituencies out of 156 announced so far..still a long way to go!

Full Final Results To Be Posted As They Come..